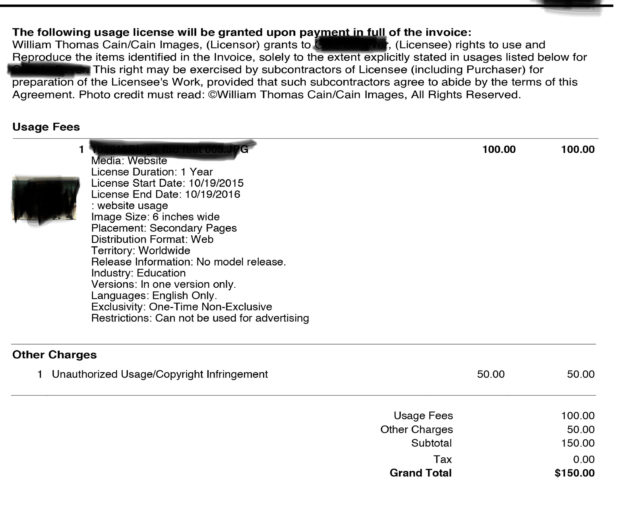 A few months ago I was made aware of a school that had pulled one of my images from a clients website and then used it on their website with a press release. I won’t mention names, but let’s say it was a school that could afford to have purchased a usage license.

When I saw the unauthorized use, I wasn’t surprised that it had happened. In my experience, people tend to think if something was published online, it is in the public domain. Not true. The author owns the copyright. This means that if someone, even the subject of the photograph, wants to use the image in any other way they must receive permission from the original author of
the photograph. Plain and simple.

In this case, the image was registered with the US Copyright office. All I really wanted was for the school to admit they had done something wrong and apologize. And that is what I expected when I emailed the communications department. The email that I sent basically asked how they had received the image as well as permission to use the image. If they didn’t have permission or a license for the use I’d be happy to sell them a license to use the image on their site.

Two days later I see that my image has been removed from their site, but no response from their communications director. So, I then sent another email which thanked them for removing the image, and also asking where I should send the invoice for the “unauthorized” 9 months of use on their site. Yes. It was on their site for 9 months before it was brought to my attention.

Again. I wait. No response. Four days later I email the communications director saying I would appreciate a response.

Wait another three days. Finally, the communications director gets back to me. Tells me where to send the invoice, but no apology. No excuses. Nothing.

So, I invoiced them $100 for 9 months of use on their website and added another $50 for unauthorized use.
Could I have pursued more? Probably. Would it have been worth it? Probably not.
Fact is that the image really doesn’t have much value other then to the people that pilfered it for reuse. It’s an image that was published with a story on one of the school’s athletic teams. The reality is that the players in the image won’t be moving on to a big college, so the value of the imagery as far as reuse is somewhat limited. The reasoning behind charging the rate that I did was to make a point that people can not pilfer a copyrighted work without paying for it.

Funny thing is that if the school had just asked if they could use it, I probably would have said yes and gave it to them as a non-profit contribution.

I am still waiting for the apology.