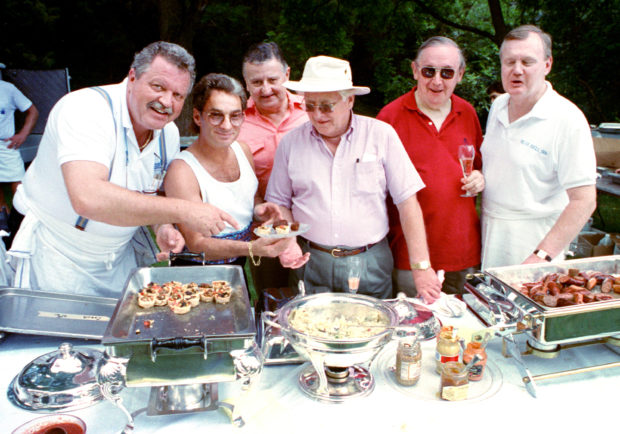 I believe this image is from some time in the mid 90’s. I was assigned to shoot an Iamy, or David Iams society assignment. The event was at the home of #Chef George #Perrier (2nd from left). It featured some of the greatest chefs in Philadelphia history cooking on the grill. The one I most remember though, is Chef Tell (left), born Friedman Paul Erhardt who owned Chef Tell’s Manor House in Upper Black Eddy, Pennsylvania. It was a place that my wife and I frequented often and got to know Chef pretty well. He was a wonderful, jovial fellow always looking to put a smile on your face as well as feed your tummy. I recall one assignment where he was teaching a grilling class at his restaurant. He was showing the folks how to grill steaks. While I was photographing him, after one demonstration he handed me a fork full of steak and wanted me to taste it. As politely as I could, I declined because I don’t eat red meat. He snickered, then put his massive hand upon my shoulder, and squeezing the back of my neck said, “You’ve got ball my friend. No one tells me no.” Uh, oh!! I thought. Scared to death because he was a big imposing fellow. Then he busted out laughing. Received that he didn’t kill me, so did I. He never let me forget that night. Teased me whenever I stopped by.

I have to tell you. I always had the best doing experiences at his place and wish he was still around today. What a nice dude. To this day, I miss that guy.
That said, I can’t recall who the other chefs are in the photo. #cheftell #erhardt #perrier #dining #masterchef #genious #cook #dine #philadelphia #restauranteur #legend #manorhouse #greatfoodgreatcompany #easterbrunch #grill #barbeque