Video that I made last night at the candle light vigil for 13 year old Gianni Forte, who was killed in an ATV accident last weekend.
Hundreds of community members came out to show their love and support for Gianni, his family and friends.
I spoke with his grandmother, who explained that Gianni was not allowed to ride without a helmet or on the street. Very sad story. One of the tougher things to photograph. 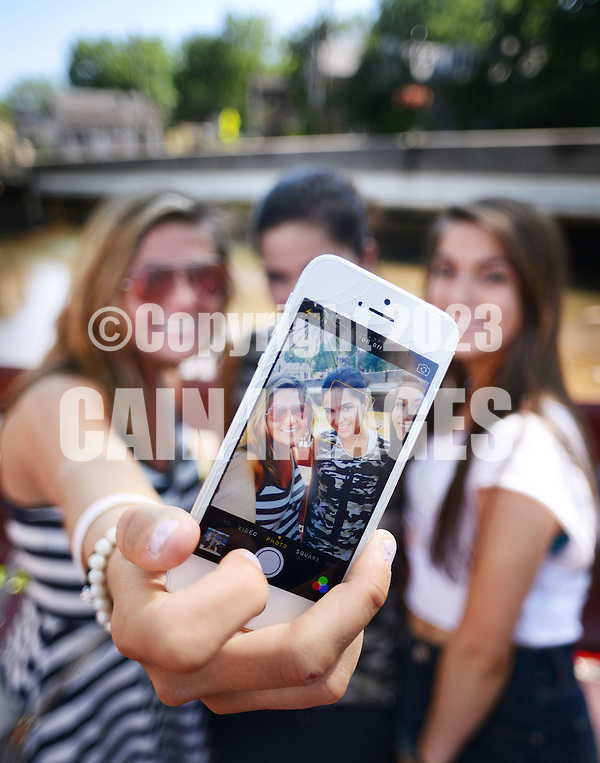 NEW HOPE, PA – JUNE 02: From left, Allie Becker, 19, Lauren Fitzpatrick, 18 and Capri Wagner, 18 all of Newtown, Pennsylvania are seen through an iPhone monitor as they make a selfie near the Bucks County Theater on a warm afternoon June 2, 2014 in New Hope, Pennsylvania. The temperature reached 82 degrees in New Hope and is expected to remain in the mid-80’s for the next few days. (Photo by William Thomas Cain/Cain Images) (William Thomas Cain) 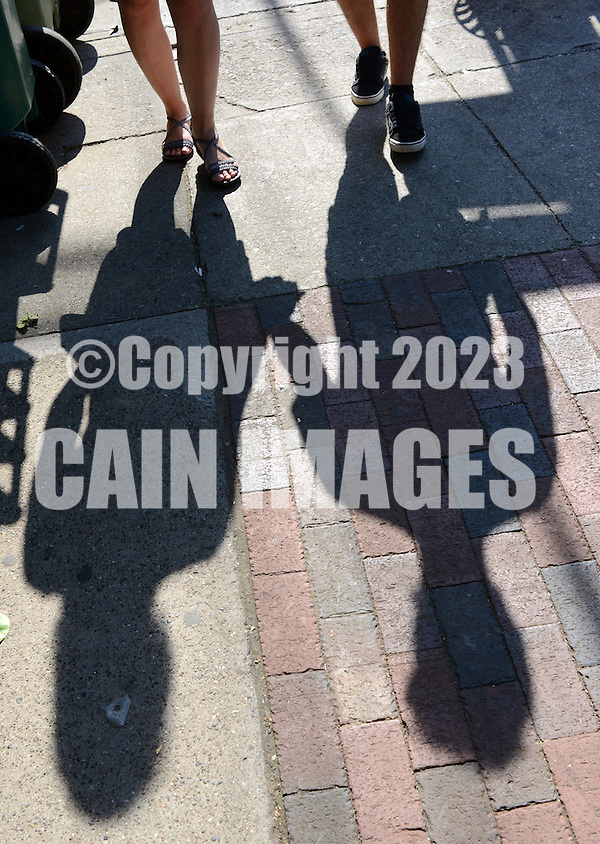 NEW HOPE, PA – JUNE 02: Debbie Morrison, 31, of Seargentsville, New Jersey and Miguel Santana, 23, of Spain walk together as their shadows cast as they hold hands on a warm afternoon June 2, 2014 in New Hope, Pennsylvania. The temperature reached 82 degrees in New Hope and is expected to remain in the mid-80’s for the next few days. (Photo by William Thomas Cain/Cain Images) (William Thomas Cain) 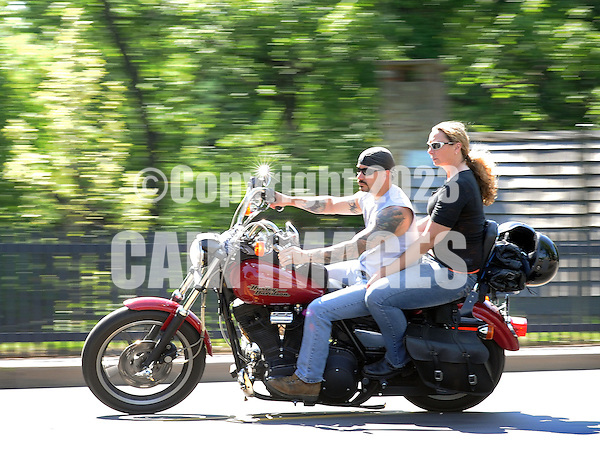 NEW HOPE, PA – JUNE 02: An unidentified couple rides a motorcycle on Main Street on a warm afternoon June 2, 2014 in New Hope, Pennsylvania. The temperature reached 82 degrees in New Hope and is expected to remain in the mid-80’s for the next few days. (Photo by William Thomas Cain/Cain Images) (William Thomas Cain) 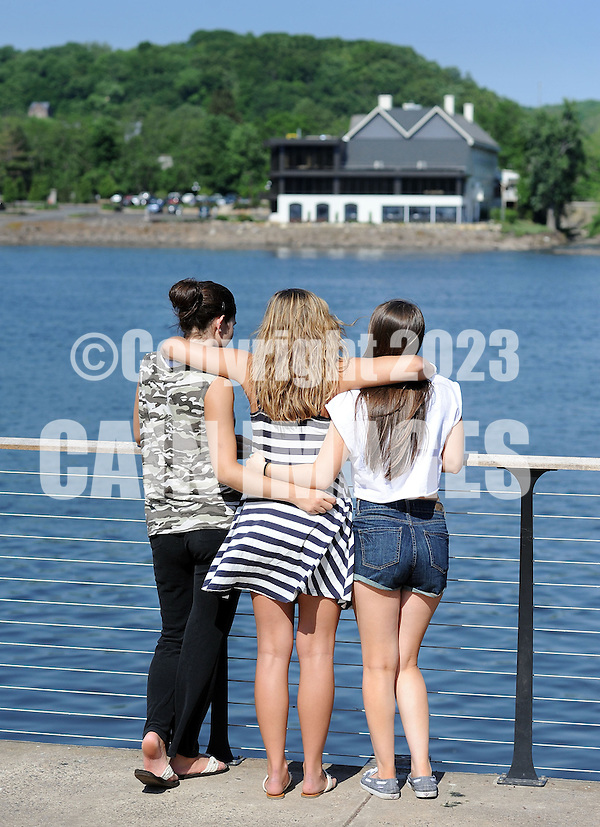 NEW HOPE, PA – JUNE 02: From left, Lauren Fitzpatrick, 18, Allie Becker, 19, and Capri Wagner, 18 all of Newtown, Pennsylvania look out onto the Delaware River on a warm afternoon June 2, 2014 in New Hope, Pennsylvania. The temperature reached 82 degrees in New Hope and is expected to remain in the mid-80’s for the next few days. (Photo by William Thomas Cain/Cain Images) (William Thomas Cain)

Recently, I photographed model Sabrina West at a local park. She wanted to use some of the photographs to enter the a contest contest. I told her I don’t have a problem with her using the images for the contest, as long as my watermark remains intact. So, she uploaded the photos to the site. Problem is that when you upload the images, their system automatically crops the photo as tight as possible, removing any watermark on the edge of the frame. The site also lacks a backstop asking the model if she has a photo release from the copyright holder allowing her to use the images for the contest. In this case the model has permission, with conditions, and I would have provided a release if asked and my conditions were met.

A few weeks ago, I clicked on the link to the models profile on the site, expecting to see my watermarked images. What I saw was my super cropped images, sans watermark. Immediately, I emailed the model. She informed me she had done what I asked, but a marketing company cropped the photos.

(see below for the frame grabs)

I then sent the two images to the person I was told would handle it. Waited for acknowledgement that the images were received, but nothing. I emailed the contact a day or so later to follow up as to whether the pix had been received. At this point I’m starting to get a bit miffed. Still no response.

Since I had received no response or acknowledgement that the images were received, my next step was the beer company. I explained to them in an email message:

The marketing company and national beer company do not have a photo release from me to use these images on the site, thus infringing upon my rights. I have contacted a marketing company in order to resolve the issue. I notified them I would allow the use of the images if they post my watermarked un-cropped versions. After initially agreeing, they have not responded.

(this is what I had sent to replace the images)

Two days later I receive a terse phone message from the company’s CEO. In the voicemail he states that national beer company’s Corporate legal department contacted him about my images. His reaction is that while national beer company would like him to replace the images, like I have asked, he’s prefer to delete the model’s profile on the site all together. Oh, and he will also let her know that she’s being deleted because of me. Was that supposed to scare me? He also went on to say “I expect a return phone call today.”
One for promptness, I call him within 5 minutes.

He starts whining to me that he has all of these emails from corporate asking him to replace the images I have asked and that I’ve caused him allot of grief. He then asked if I contacted national beer company corporate legal department about them infringing upon my copyrighted work. Proudly, I say “Yes. I did!”

He goes on to tell me that hurts his business. Really? And my business isn’t hurt by people using my images without any kind of compensation? I explain I wouldn’t have had to do that if his people had just done what was asked or responded when I followed up. The person he put me in touch with never responded. He said, “That’s because she’s in Florida.” And…I’m supposed to know that how? From her non-response? I’m a photographer, not a mind reader. And quite frankly, that’s not my problem.
I told him I really don’t care if they delete the profile. But, all I asked is that they swap out the images for my watermarked version. He agrees to do that. Tells me to send him the images. I did, and that’s where we stand now. That was Friday. Again, I’ve emailed a follow up and no response.

This is a clear violation of copyright law.

I’m leaning towards going back through the corporate legal department again.

First of all, there are a few problems with their site and terms. They do not ask if the model had a signed photo release from the photographer, the copyright owner, or seek permission from the photographer to post his/her copyrighted work. The site automatically crops models images, thus removing watermarks from the imagery. Thus if you agree to let a model post the pix,a marketing company crops anyway they see fit.

What in the world are these people thinking? Am I supposed to think it’s cool that they have my imagery in their contest? Frankly, who gives a damn!? My work has appeared all over the world. Hell, I’ve even had a Newsweek cover. The beer company pays the marketing company, and they claim to make no money off the contest. Why are they in business?

What do the photographers, whose images are used without permission get? Absolutely nothing!! Not even attribution for their hard work making these models look good. And, let’s be honest here. I hate to say this, but some of the “models”ONLY look good because of the photographer’s team that makes them look good.
For each infringement I could seek up to $150,000 in copyright infringement damages against a marketing company and beer company. All I asked for was attribution.

The vibe I got was that this dude was trying to make me feel guilty for protecting my rights as an artist.
That doesn’t work on me.

I know my rights, and I’ll be damned if I let them use my imagery without attribution or compensation.

Updated:  The issue has been resolved. I had them remove the images because they couldn’t make it so my watermark was visible.  Wonder how many other photographers are getting screwed by these people.